Originally published on 18APR2012 for Examiner.com 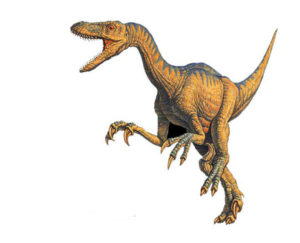 April 18 has been designated Velociraptor Awareness Day. The day was created not only to remember those who have fallen to these terrible beasts, but to raise awareness of how one can attempt to protect themselves from these dangerous and cunning predators. For those of us who are martial artists and personal protection personnel, we may be called upon to help save the lives of humans against these menaces. It is best not to answer this call, but to run. It is best not to run all manly as if you are merely ‘regrouping’, but to flail your arms and cry like a little girl. The velociraptor will see this as a sign of respect and seek out a different, less reverent target. If for some insane reason we find ourselves morally or ethically compelled to intervene between a velociraptor and its prey, the first thing we must evaluate is the main engagement styles martial artists have at our disposal; grappling, percussion, and weaponry.

Grappling techniques against a velociraptor are ill advised. The shoulders have more of a forward and down orientation compared to humans that will require major adjustments to grappling techniques to effect most types of joint locks. The rear-facing ankle bone also means that any type of leg controls will be utterly alien and unfamiliar to a similarly trained groundfighter. Equally distasteful is the proposition that the velociraptor has a long neck and sharp claws. While the diligent grappler is learning to adapt his technique to these new body mechanics, the velociraptor is using his face as a chew toy. If the grappler somehow gets in very close and can get under the raptor’s mouth, it will counter by lacerating his guts open with his rear claws. No, the skeletal structure and body mechanics are just too different from that of a human to make the grappling arts such as jujutsu and aikido effective, and create a dangerous “learn on the job” proposition.

Special hint: If you must grapple with a velociraptor, go for the figure 4 tail lock. Done properly, from a ground technique, the grappler uses his feet to push against the velociraptor’s back legs. This keeps his rear claws from lacerating you, and you’re sufficiently far away from his mouth and teeth. Its front arms are too weak to help it stand. Hope that your help arrives before its help arrives: They are pack hunters, and they don’t tap out.

Percussion techniques against a velociraptor are also ill advised. The primary target would conceivably be the creature’s head. Unfortunately, the majority of a velociraptor’s head is it’s mouth and the majority of its mouth is it’s teeth. Putting hands and feet inside the mouth of a velociraptor is inadvisable. To make matters worse, the body orientation of a velociraptor is advantageous in that it does not stand upright. Leaning forward in hunting mode, its torso remains well behind its formidable jaws, a very effective protection. Even barring the raptor’s primary weapon, its secondary weapons are its claws. These are sharp, and made for climbing and rending flesh. While the percussionist throwing a punch is thinking of hitting with the correct form, the Velociraptor rakes your face with its talons and watches your mandible dangle uselessly from your skull. If Wolverine saw the wounds, he’d be so impresssed that he’d log on to Ancestry.com to see if he was somehow related to the raptor.

Special hint: If you must engage a velociraptor with punches and kicks, do your best to stay at the thing’s side. It’s forward sloped shoulders will cause it to have a hard time hitting you with it’s arms and claws, and its legs are so geared to running and hopping there is not as much side to side movement capability. Staying at the side towards the rear is the best flank to avoid its long neck and bite.

This leaves the martial artist with weaponry. Of course, the first thought is something along the lines of an AR-10 with the formidable 7.62×51 cartridge and a magazine with the shot capacity of a bad 1980’s era soldier of fortune movie. This is an excellent option if the shooter can score the hits. Velociraptors are fast and stealthy, though, meaning a protector must be fully aware and able to bring this heavy main battle rifle to bear very quickly. Too often, the velociraptor surprises its prey and is already engaged, making the rifle useless in close quarters. Remember, close quarters combat (CQC) to humans is within arm’s reach while CQC to a velociraptor is with your head in its mouth. It is likely that the best firearm for velociraptor defense is the 12 gauge pump shotgun with a sawed off barrel and some 3” magnum 000-buckshot , or a possibly a Magnum Research BFR Revolver in .45 Long Colt / .410 shotgun.

Aside from firearms, other weapons considerations are pepper sprays, and melee weapons. It is a little known fact, but oleoresin capsicum, the chief ingredient in pepper spray, has the same meaning in the velociraptor’s language as “mild sauce”. This is pure speculation on the author’s part, as no velociraptors have volunteered for pepper spray application, but I’m going to call this “ineffective”.

This leaves melee weapons, namely swords. Swords are noteworthy for their ability to do a significant amount of damage, as well as keeping the attacker at a slight distance. The sword equalizes the protector against a velociraptor if he knows how to use it. The best kind of sword for velociraptor defense is the katana. Its curved blade facilitates slicing, and the blade’s legendary sharpness will be needed to rend the leathery hide of this predator. Swords win against teeth and claw, because while formidable, the velociraptor risks taking damage on its person by attacking the sword wielder.

Special hint: It is important to note that dinosaurs are related to birds, and chickens are birds. Decapitated chickens run around like a chicken with its head cut off. That’s why that phrase exists. Velociraptors do the same, and their heads bite too. Decapitate, blend with the force of the body going by, then kick the head away. Weapon, grapple, percussion = WIN.

By the time the reader is perusing this article, it will be too late for many of you. For those that will live to see Thursday, please consider enrolling in your local kendo, iaijutsu, or other sword training curriculum so that you can be ready for next year. Also take up running. Jogging and distance running is good but remember the arm flailing and crying. The runners you see are actually preparing for this holiday, but often leave out this side of the training.

The instructor performs a kata (martial arts pattern featuring many techniques) nearly perfectly. In his class, his students look on with attention. They will be practicing and testing on this pattern and this is their first time viewing it. The various strikes in the kata are emphasized with a kiai (focused yell), that both add energy to the performance and force to the attacks.

What each student sees depends on his level, but also his background. At one point in the kata, the instructor does a double punch, striking simultaneously to head and chest level.

The karate practitioner sees the punch, and knows it to be a good, solid technique, virtually guaranteed to hit one of the two targets being aimed for. It has drawbacks, of course, in that both hands are striking so there are no defenses available. Still, in the kata, it might represent a finishing blow. The fact that the instructor pivots away and low-blocks represents that the target is finished an a new assailant is being dealt with.

The grappler in the audience sees a throw. The two fisted punch is really a grab, pulling the target in. The pivot afterward represents the throw, followed by a low block protecting himself from an opponent on the ground or is in actuality a strike to finish off the assailant.

The weapons expert in the group sees a weapon technique, a block with a staff or chain, causing the opponents thrust to sail by him. The pivot and turn afterward represent follow-up attacks while the opponent is off balance.

After conferring with their classmates about their different perceptions, they ask “Which one is right? We all saw it a different way.” The instructor smiles and says “You are all correct.”

Economy of movement is one of the best indicators of legitimate martial arts. Not only should all techniques be free of unneeded movement, but the movements themselves should be applicable to multiple actions. If the martial art is a complete fighting system, every action can and does have multiple applications.